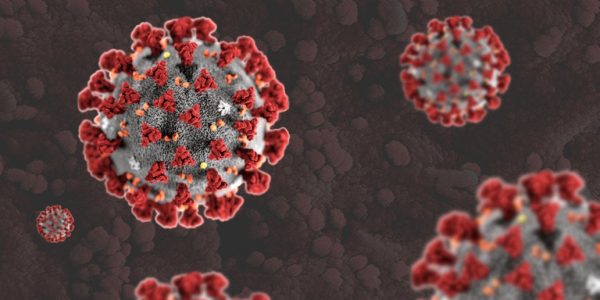 New daily cases of corona virus show that lock downs and physical distancing do work, though it takes time. They work by reducing the pool of potential people that the virus can infect, which slows the spread and allows authorities a chance to contact-trace and quarantine those that have been infected or that have been in contact with people infected. It is a mammoth task and economically destructive.

The US was slow to implement lockdowns and they’re still not universal across the country. The chart below shows the rolling seven day average of new daily cases for selected countries. A rolling average is used because the data is noisy and the average helps to smooth out anomalies. Previous epicentres in Italy and Spain are trending lower. The UK (including Prime Minister, Boris Johnson) continues an upward trend, though at a slower rate.

The US is, very clearly, still escalating rapidly though the rate of growth is slowing, however this may be more a function of the number of tests being carried out.

The latest on the outbreak
As of April 7, 2020, there were over 1.3 million confirmed cases of Covid-19 around the world and over 76,000 fatalities. The US, with over 370,000 cases, is grappling with a severe outbreak. New York state has over 130,000 cases and is facing shortages of critical medical supplies and equipment. In Western Europe, Italy and Spain have a combined total of over 270,000 cases. The death rate in the European Union is almost four times the rate in the US.

Half the world’s population, about four billion people, is currently subject to some form of mandated social distancing. Most Western European countries have implemented various types of national lockdowns. State and local governments in the US have issued strict shelter-in-place or stay-at-home orders requiring nonessential business to close and residents to avoid leaving their homes unless necessary. While a number of countries have announced extensions of social-distancing measures, several European governments—Italy, Denmark and Norway—are preparing to ease restrictions as infection and fatality curves have flattened in recent days.

The sizeable economic effects of the pandemic are becoming apparent. Data from China indicates the virus resulted in a 20% GDP decline in the first two months of 2020; other countries forced to implement aggressive social distancing will likely experience similar effects. In the US, over 10 million American workers filed for unemployment in the last two weeks of March. Economists estimate the country’s unemployment rate is currently at 10% and could rise to 15% later this year.

The global economy now faces two threats. If governments around the world fail to slow the virus’s progression or if they relax social-distancing measures too aggressively, the human toll and economic effects will be significant. Furthermore, the pandemic is jeopardizing the stability of the financial system.

The Federal Reserve and European Central Bank have launched an unprecedented effort to prevent a liquidity crisis that could jeopardize the entire global financial system, but fiscal stimulus measures are almost certainly needed to stabilize the macroeconomy. Legislators across the developed world have promised to deliver economic relief, and many have already done so. France and Germany have both announced large stimulus packages, but long-standing tensions within the eurozone are hampering regional relief efforts. In the US, President Donald Trump signed a $2 trillion stimulus bill on March 27, although the rollout of the legislation has been rocky.

Looking ahead
The Situational Threat Report (SITREP) Index is likely to increase further as aggressive social-distancing measures are implemented and extended in more countries. New research indicates these measures may be required for much longer than many are expecting, and the economic and financial damage from maintaining these disruptions will grow geometrically over time. The duration of these disruptions will be an important determinant of the pandemic’s ultimate economic effects. Considerable uncertainty remains, however, about the duration of these measures, which is why we are not yet raising the index to level 7 on a scale of 10. We still anticipate raising the index to level 7 by early April if the situation continues on its current trajectory.

Since we first published the index in February, observable patterns have helped resolve some unknowns, but significant uncertainty still surrounds other critical determinants of the virus’s ultimate effects. We originally constructed the index to encompass the broadest possible range of potential developments across three dimensions: the epidemiological progression of the virus, governments’ policy responses to the pandemic, and the epidemic’s macroeconomic impact. We believe that our original range (from 0 to 10) still encompasses the full range of possible outcomes.

Encouragingly, developments along all three dimensions have reduced the likelihood we will ever reach the uppermost range of outcomes. That said, we remain cautious about ruling out more extreme possibilities in a situation as multifaceted and fluid as the global Covid-19 pandemic.

In light of our evolving understanding of the contours of the pandemic, we are making minor clarifying adjustments to the descriptions of the index’s upper levels (7 through 10). These adjustments have not changed the meaning of those levels, nor do they imply a change to the relationship between the index level and recommended business response.

We believe these changes enhance readability and transparency about how we are calibrating judgments on the current global situation surrounding the pandemic. Specifically, the language now focuses more on the macroeconomic impacts, although these effects are intertwined with both government policies and the epidemiological situation.

To provide additional context, we also offer the following commentary about the two sets of ranges in the upper part of the index:

Levels 7 and 8 imply that enough macroeconomic damage has occurred or is likely to occur to transform a one-time shock into a more severe, broad-based, multiquarter recession comparable to other severe recessions since World War II. In particular, if solvency-risk concerns spread beyond the initial set of frontline industries most directly impacted by social distancing, the resulting economic contractions are likely to be more severe and long-lasting.

Levels 9 and 10 imply that macroeconomic conditions are adverse enough to produce business failures far beyond the scope of typical contractions, unless governments implement adequate backstops. For example, if governments mandate extremely strict social distancing for over a year, many normal market activities would likely be severely impaired.

We continue to maintain the index at Level 6 at this time. Barring unexpected developments, we will consider raising the index to Level 7 in early April, but offer no prejudgments about the likelihood of an increase at that time. We are closely monitoring several factors that will affect the pandemic’s course: the progress of disease-mitigation efforts in places like Italy and Washington state, which provide useful information about how much distancing is required to achieve stabilization; fiscal and monetary policy initiatives to address the macroeconomic damage resulting from the pandemic; and emerging treatment protocols, which could change the epidemiological facts of the virus. Folks as you know, we directly start our talks in all the important developments that goes around world, as 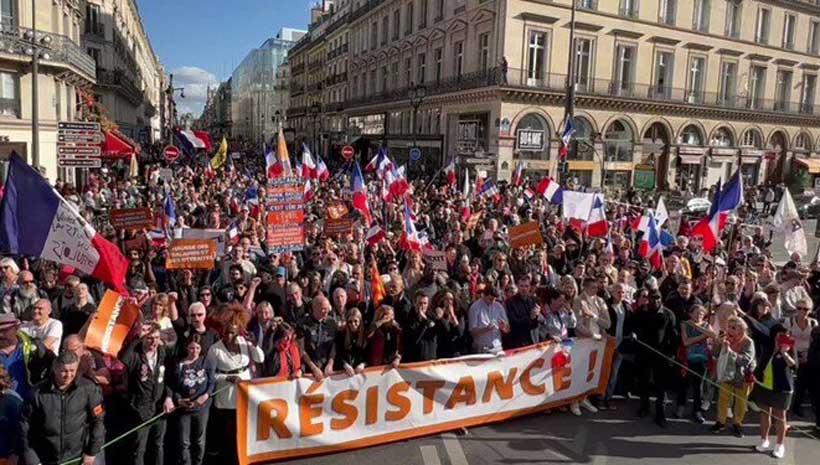 Thousands of protestors in Paris gathered to demand France exit from NATO (US led military coalition). By becoming part 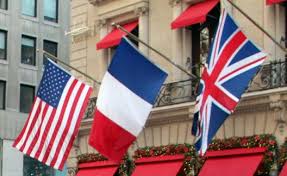 Right from the Gun-Fire era 200 years back UK, France have been invading both – politically & financially weak